Employers added 4.8 million jobs in June, the Labor Department said Thursday. A clear indicator of the economy showing signs of recovering was the unemployment rate falling to 11.1%. That’s down from a peak of 14.7% in April.

June’s positive payroll growth was the second month of gains. This comes after a loss of more than 20 million jobs in April when the COVID-19 pandemic brought the economy to a near halt. In recent months the number of part-time workers grew exponentially fueling growth. Now, while full recovery is a ways away, these numbers are very encouraging.

President Trump called the latest job report figures, “spectacular” at a news conference an hour after they were released. 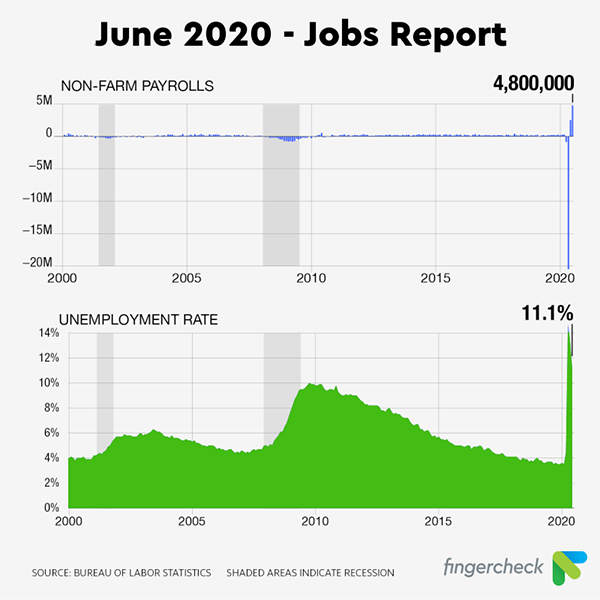 Stocks on Wall Street rose on Thursday. This was followed by global markets jumping higher and extending this week’s rally to a fourth day.  Data also revealed that hiring in June was stronger than originally anticipated.

The S&P 500 rose just over 1%, which gave it an average of a 4% rise for the week. Following the trend, the European indexes rose to an average of 2%. Asian indexes closed their trading session with similar results.

Stefano is a seasoned marketing professional and writer with diverse industry experience. Born and raised in NYC, he holds a Journalism degree from Queens College, and is currently the Head of Marketing at Fingercheck.