The (3) three regions in NYS include The Mohawk Valley, Finger Lakes, and Southern Tier. Each has so far, met the criteria made up of 7 metrics required to initiate phase one of the re-opening. Those seven (7) metrics are based on two core factors: infection rate and capacity. Regions must prove they have controlled their infection rates and have established the hospital, testing, tracing, isolation, and compliance capacities to safely sustain their re-openings.

A two-week monitoring period will be required various phases which can be found here.  Any region slated to re-open will have a Regional Control Room to closely monitor developments. Should a region no longer meet any one of the seven metrics at any time, its control room will act as a “circuit breaker,” and immediately end the reopening process until the metric is re-met.

Mayor de Blasio does not expect non-essential businesses to re-open in any of New York’s 5 boroughs until June. That said, Cuomo announced that the latest numbers show New York is back to the same level of reported COVID-19 cases in May that it had in March. “Where we are today is basically, with the number of new cases, is basically right where we were when we started,” he said.

The total number of confirmed Covid-19 cases in New York (on March 20) was 7,102. Since then, over 330,000 in the state, have tested positive, according to a tracker maintained by state health authorities. Add to that, over 20,000 deaths and you realize the fight is long from being over. At the moment, neither the city nor Long Island is ready to re-open as each meets four (4) and (5) of the seven metrics, as of Monday. 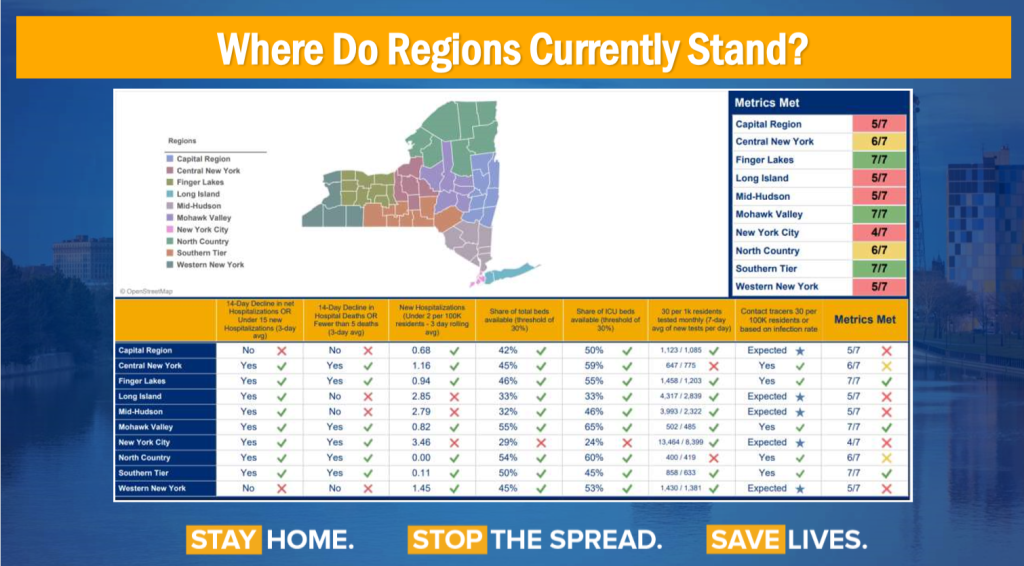 Only regions meeting the (7) metrics can, starting on May 15, enter the first of four re-opening phases.  The first phase includes construction and manufacturing business. The second phase involves retail, finance, and professional services, while the third addresses food and hospitality. Education and entertainment will be the last sectors to resume.  That makes sense, seeing as they involve more people gathered in a concentrated area allowing the virus to spread. Any region within New York State needs to meet all 7 of the following metrics (shown below) in-order to re-open.

Metric #4 – Hospital Bed Capacity. Regions must have at least 30% of their hospital beds available.

Metric #5 – ICU Bed Capacity. Regions must have at least 30% of their ICU beds available.

Metric #6 – Diagnostic Testing Capacity. Average daily diagnostic testing over the past 7 days must be sufficient to conduct 30 tests per 1,000 residents per month.

Metric #7 – Contact Tracing Capacity. The number of contact tracers in each region must meet thresholds set by the Department of Health, in collaboration with the Johns Hopkins University School of Public Health and Vital Strategies.

So for now, monitoring the outcome of these 3, re-opening regions will serve as an indicator of how soon (or not) the rest of New York can come off the pause button.

Stefano is a seasoned marketing professional and writer with diverse industry experience. Born and raised in NYC, he holds a Journalism degree from Queens College, and is currently the Head of Marketing at Fingercheck.